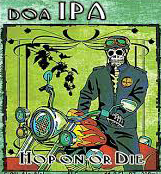 Halloween is one of the most anticipated holidays of the year for the brewers of craft beer because the newly harvested crops make an assortment of fresh ingredients available. In addition, the spirit of the holiday allows microbreweries to show just how creative they can be. Although several pumpkin ales are on our list of beers to try this Halloween, several other unique microbrews have been included. Try a few, or try them all. They are sure to be a hit at your next Halloween party.

1. Dead Guy Ale – Rogue Brewery
Dead Guy Ale is the flagship microbrew from Oregon’s Rogue Brewery, but it is a natural choice for any Halloween party. It is brewed in the style of a German maibock but has a red-amber color and a strong, hoppy finish.

2. Oak Jacked Imperial Pumpkin – Uinta Brewing Co.
This imperial pumpkin ale from Uinta Brewing in Salt Lake City is differentiated from other pumpkin ales by being aged in oak barrels. At 10.31 percent ABV, this is definitely a sipping ale but one that is welcome at any event.

3. DOA IPA – Cerveceria Mexicana
DOA IPA is crafted by the third-largest brewery in Mexico and is labeled as the first Mexican microbrew imported into the United States. DOA IPA is subtitled Hop On or Die, and it has a full body with a floral aroma.

6. Wytchmaker Farmhouse Rye India Pale Ale – Jester King Brewery
Wytchmaker is only one of a large selection of specialty microbrews from this Austin, Texas, brewery. It is unpasteurized, unfiltered and crafted only with wild yeast. This farmhouse ale is earthy yet floral and is named after the Salem witch trials.

7. Pumpkin Massacre – Infamous Brewing
Infamous Brewing, also in Austin, is responsible for one of the best pumpkin beers in the nation. It is a wonderful choice for those who like only a hint of pumpkin, and the pecan rises above the notes of nutmeg, cinnamon, and toffee.

8. Witch’s Wit Wheat Ale – The Lost Abbey
The label of Witch’s Wit depicts a witch burning at the stake, but this wheat ale is refreshingly mild. It is subtly spiced with orange peel, grapefruit zest, and coriander, but the prevalent flavor is that of toasted wheat.

9. Punkin Ale – Dogfish Head
Dogfish Head is one of the top microbreweries in the U.S., and its Punkin Ale does not disappoint. This smooth brew is dark and malty, and the pumpkin is complemented with a generous addition of brown sugar.

10. Pirate Noir Oatmeal Stout – Prairie Artisan Ales
Pirate Noir is brewed in Tulsa, Oklahoma, and it is one of the most intensely rich beers in this Halloween list. It is an imperial oatmeal stout that is aged in Jamaican rum barrels, and it carries hints of coconut and vanilla.

13. Krieky Bones Wild Ale – Firestone Walker Brewing Company
Krieky Bones is a refreshing wild ale that is fermented with sour cherries and matured in French oak barrels. It was originally brewed as a birthday gift for the brewery’s owner, and it tastes like spicy cherry pie.

14. Ichabod Pumpkin Ale – New Holland Brewing
Ichabod Pumpkin Ale is named after the famed character in the Legend of Sleepy Hollow and has been brewed since 1997. It has a modest ABV at 4.5 percent and is most enjoyable as a dessert beer.

15. Good Gourd Imperial Pumpkin Ale – Cigar City Brewing
This imperial pumpkin ale comes out of the cigar district of Tampa, Florida. Legend has it that it is brewed only with pumpkins possessed by good spirits rather than evil ones, and it is brewed specifically for Halloween celebrations.

16. Black Jack Porter – Left Hand Brewing Company
This is the second entry on the list from Left Hand Brewing. It is an English-style porter with hints of espresso, dark chocolate and herby hops, and the beer pairs well with tiramisu, New England clam chowder, and pot roast.

17. Zombie Dust Pale Ale – Three Floyds Brewing Co.
The folks in Munster, Indiana, at Three Floyds, really know how to brew a Halloween beer. Zombie Dust is a pale ale meant to provide refreshment during the zombie apocalypse, but until then, it is available year round.

18. New Belgium Gratzer – New Belgium Brewing
Although New Belgium receives top billing, Gratzer is brewed in conjunction with Three Floyds. This is an old style of beer from Poland with a smoky wheat flavor. It pours nearly black, but it is very drinkable at only 4.5 percent ABV.

19. Dock Street Walker – Dock Street Brewery
The name of this zombie-themed beer gives a nod to The Walking Dead, and it is quite possibly the most famous Halloween beer in the country. It is an American pale stout with a smooth, creamy feel brewed with cranberries for tartness.

20. Ghostrider White IPA – Wasatch Brewery
Ghostrider is another beer from Salt Lake City, but this one is a white IPA brewed from pale malts and citrusy hops. It is unfiltered and said to pair well with squirrel roasted over an open flame.

21. Pumple Drumkin – Cisco Brewers
Pumple Drumkin hails from Nantucket, and it is one of the hoppiest pumpkin ales ever brewed. It was crafted by a former baker to mimic the taste of pumpkin pie, but many say this beer is better than pie.

22. The Fear Pumpkin Ale – Flying Dog Brewery
Flying Dog has long been known for its affiliation with Hunter S. Thompson and artist Ralph Steadman, and The Fear is well known among their fans. This imperial pumpkin ale is made with local Maryland pumpkins and a secret blend of spices.

23. Howling Wolf Ale – Grand Teton Brewing
Howling Wolf is a Bavarian-style hefeweizen brewed in Victor, Idaho. Although it can be enjoyed any time of the year, Howling Wolf is a great session ale for Halloween It has a light body and caries hints of sweet fruit and delicate spice.

24. Pike Harlot’s Harvest – The Pike Brewing Co.
The Pike was founded in Seattle in a former brothel, which explains the name of this autumn favorite. This pumpkin ale is bold and full bodied with hints of caramel. Organic malts, Mt. Hood hops and Nugget hops are used in the brewing process.

25. UFO Pumpkin Ale – Harpoon Brewery
Harpoon is Boston’s alternative to Samuel Adams, and its UFO Pumpkin is a Halloween favorite. This unfiltered pumpkin ale is smooth, slightly sweet and brewed with Northwest hops. It is very easy to drink and is only available through November.