Oktoberfest is the most widely known and celebrated German holiday. This 16-day festival begins in late September or early October and has been held in Munich, Bavaria, every year since 1810. It was originally a festival in celebration of the marriage of King Ludwig I to Therese of Saxe-Hildburghausen, and all of the citizens of the city were invited. The event was such a success, it was held again the following year, and it was eventually made an annual holiday.

In the years that followed, Oktoberfest became a time to celebrate the abundant fall harvest and the dark, malty beers crafted by the six local breweries in Munich. German emigrants continued the Oktoberfest tradition as best they could wherever they went, and today, it is celebrated in all parts of the world.

1. Oktoberfest Beer Brewing Kit
The best way to celebrate Oktoberfest is to brew your own Oktoberfest beer with a kit that includes all you need to get started. It comes with a full set of brewing supplies, including a glass carboy, tubing, clamps, an airlock and a racking cane, and a recipe kit with all the ingredients for 1 gallon of authentic Oktoberfest-style beer.

2. Oktoberfest Mug with Engraving
To celebrate the Oktoberfest holiday properly, you’ll have to ditch the red Solo cup and buy a mug of your own. While a stein is a traditional vessel for drinking beer in Germany, a solidly built glass mug is the more versatile and comfortable choice.

3. Schaller & Weber Oktoberfest Sausage Pack
While beer is a large part of Oktoberfest, it is certainly not everything. An authentic Oktoberfest celebration must include a selection of traditional German sausages. Bratwurst is the sausage of choice for many, but others prefer such lesser-known varieties as knackwurst and bockwurst. Don’t forget the Bavarian mustard and sauerkraut.

4. Hofbrauhaus Oktoberfest Hooded Sweatshirt
Hofbrauhaus, located in Munich, Germany, is one of the oldest and most prestigious breweries in the world, and it is the perfect embodiment of what Oktoberfest is all about. An Oktoberfest Hofbrauhaus hooded sweatshirt will keep you warm during blustery autumn days, and it lets you show off your refined taste in beer.

5. Oktoberfest Beer Gift Box
The Oktoberfest Beer Gift Box from BeerGifts.com is the perfect gift for anyone who enjoys bold, robust beers designed to warm the belly. This gift box includes six 12-ounce bottles of Oktoberfest beer from Sierra Nevada. One of the top craft breweries in the US, and a selection of snacks, such as Anette’s Beer Brittle, Nunes Farms roasted cashews and seasoned pretzels.

6. Oktoberfest Glass Beer Boot
Why celebrate Oktoberfest with a boring stein or mug that looks just like everyone else’s when you can drink your beer from a truly unique Oktoberfest glass beer boot? No one will ever mistakenly pick up your beer again, and it makes for a great conversation piece as you practice the fine art of drinking from a boot.

7. Oktoberfest Cookie Gift
There are only so many sausages a person can eat and beers a person can drink in a single day, and sometimes, you just want something sweet. Oktoberfest cookies are also a great idea for getting children into the fun.

8. Assorted Oktoberfest Cheese Box
A selection of gourmet cheeses makes for a fine gift for any holiday, and you can focus on German and Bavarian cheeses for Oktoberfest. A few choice types of cheese include Allgau Emmental, also known as Bavarian Swiss, Smoked Ammerlander, a Swiss-style cheese from the North Sea, and Hirtenkase, a sharp snacking cheese.

9. Lederhosen Bottle Koozies
The worst part about drinking beer in October is that the bottles can get very cold when holding them in your bare hands. This situation is easily fixed, however, with a set of bottle koozies, and nothing is better for Oktoberfest than a lederhosen design. These koozies turn any bottle of beer into a German beer.

10. Vintage Oktoberfest Beer Festival Print
If you know someone who has a few bare spots on his or her walls or someone who simply likes to collect beer-themed art, a vintage Oktoberfest print makes the perfect gift. These posters are reproductions of authentic Oktoberfest festival advertisements, and the artwork is amazing yet unique and quirky. 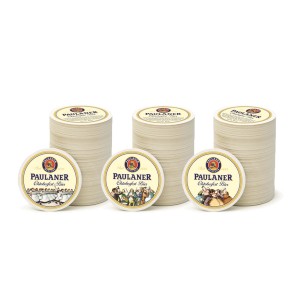 11. Paulaner Oktoberfest Coasters
Paulaner is a popular Bavarian brewery in Munich, Germany, that is often associated with Oktoberfest as one of the six official breweries for the actual holiday celebration. Even if you can’t make it to Germany, you can add a touch of German to your party with a 100-count pack of authentic Paulaner coasters.

12. 200-Year Anniversary Oktoberfest Beer Stein
For Oktoberfest hardliners, it is impossible to celebrate the holiday without an authentic German beer stein topped with a pewter lid. In 2010, Oktoberfest was celebrated for the 200th year in Munich, and limited-edition beer steins handcrafted in Germany and made of 100 percent German materials are still available.